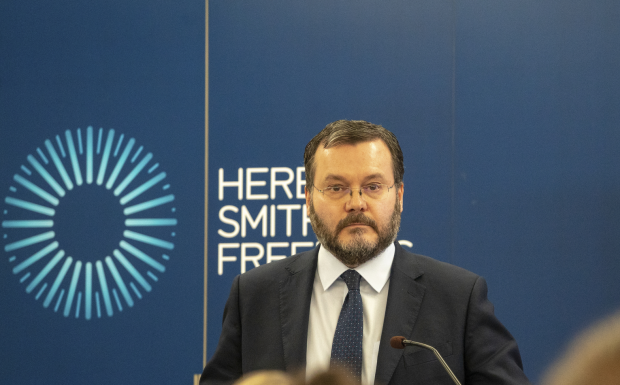 The panel discussion is rightly focused on enabling access to justice – but I would like, if I may, to put the issue in a broader context: there is a risk of being too narrowly focused when seeing law and justice through the prism of technology.

Some of us are old enough to remember when newsletters were produced using Letraset – and the awe and excitement when the first fax machine appeared in a corner of the office.

Arthur C. Clarke famously said that ‘Any sufficiently advanced technology is indistinguishable from magic’. We have arrived at a magical time – when it is possible to speak to an iPhone and it will answer a question. When brainwave reading devices and communication by thought is no longer science fiction.

Technology will of course increasingly impact on society and individuals including in the realm of legal rights. Technology will continue to improve lives in many ways – but it might also reinforce – or create new forms - of exclusion, inequality and injustice.

At the extreme, technology as a business has made some entrepreneurs “as rich as Crassus” – but today, instead of statues or colosseums they build spaceships. Meanwhile a worker at a warehouse is having every moment of their day electronically monitored – the data recorded and stored - including for toilet breaks.

In the for-profit legal and business sectors there is the equivalent of a digital arms race – with significant investment to find tools and products to reduce costs and, ultimately, to increase market share or profitability. When it comes to legal aid, the not-for-profit sector and enabling access to justice for those without means, the resources available and the investment possible is small in comparison. There is a need – and an opportunity – to share learning and experiences, and through collaboration we can integrate emerging technologies and tools. There may also be some 'digital crumbs' from the business investment table.

The law itself is unlikely to become any less complex. The ability to access technology might not create a sufficient equality of arms; those with more money, power and influence – including the State - will always be a step ahead of those who are poor, excluded or stigmatised. The rich will have VHS while the poor are left with Betamax.

There is also a risk of what has been described as ‘cyber utopianism’ – and what Jamie Susskind describes in his book ‘Future Politics’ as ‘solutionism’: the belief, almost an ideology, that complex issues and situations can be neatly deconstructed and resolved, if only the right algorithms are in place.

Investment in technology can have an opportunity cost and a displacement effect, potentially at the expense – here and now - of other needs and ways to enable access to justice.

For example, the court modernisation programme is welcome - and there are positive opportunities including more user-friendly forms, efficient case management, and assisted digital support. But the programme is being funded in part by court closures and staff cuts – justice is not more accessible when in the meantime the nearest court is a bus journey of 3 hours or more. Rule and procedure changes, such as those being introduced for whiplash injury, could mean less access to lawyers able to advise, represent or provide expert opinion.

On tackling digital exclusion: according to the House of Commons Library there are 3,700 fewer computers in England’s public libraries than in 2010 – but that may be, in large part, because there are fewer libraries. 1 in 5 of the unemployed do not have a computer at home – yet Universal Credit has to be applied for online.

There is sometimes a tendency with technology to ‘run’ before ‘walking’ – racing into development of interactive smart systems, when advice agencies and small legal practices often lack sufficient IT infrastructure or good systems for recording client data, booking appointments and case management.

It is important that we open to exciting possibilities but also to keep grounded, and see technology and justice on a broad canvass – justice does not work, of course, in a vacuum. As Carl Sagan put it, albeit in a different context: we need to combine imagination and scepticism, sometimes – I would suggest – in equal measure.